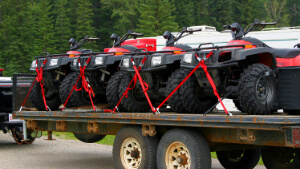 When you’re ready to hit the trails, you probably have to load your ATV onto a trailer to get to the destination. Whether it’s just a few miles away or several hours, the way in which you load and unload your ATV is significant. While it seems like a straight-forward process, missing a step could mean danger during transportation, loading, or unloading. By following this direct procedure on how to load and unload an ATV, you’ll have full confidence in the security of your ATV and yourself every time. Before getting into the loading process, you won’t be able to load unless the ground is flat. Being on a hill or declining slope will make it much more difficult to properly load your ATV. Try to find a flat area if possible.